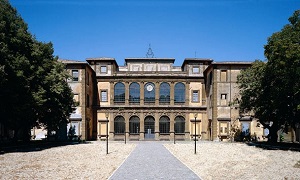 Culture as a Bridge to Global Peace

Villa Mondragone - Rectors' Conference of European Universities in the Mediterranean

The Rectors’ Conference of European Universities in the Mediterranean was held in the prestigious setting of Villa Mondragone at the University of Rome Tor Vergata, which opened the 12th International Symposium of University Professors - ’A Culture for a New Humanism’.
The meeting entitled ‘Bridging the Distances and the International Challenges’ was an important moment of cohesion thanks to the presence of more than 30 Rectors from all over the Mediterranean, united by one hope and ambition: helping promote a constructive dialogue based on mutual understanding and cooperation among universities. Being aware of their responsibility and role, i.e. the duty of work hard for development and for human, intellectual and cultural progress in our society (especially among young generations) and considering its fulfilment as a fundamental step to globally achieve better living conditions, the Rectors emphasised the role of human beings, their intellectual and professional training, their honour and dignity, their rights and health - all of which should be enjoyed by every single person. This is why the presence of Rectors and Professors from countries experiencing bloody wars and harassed by long, atrocious conflicts is so meaningful: Oron Shagrir (Hebrew University of Jerusalem – Israel); Dorit Tanay (Tel Aviv University – Israel); Hassan Dweik (Al Quds University Jerusalem – Palestine); Khuloud Dajani (Al Quds University Jerusalem – Palestine); George H. Hazboun (American University of Madaba – Jordan); Hani Mourtada (University of Damascus – Syria).

The Rector of the University of Rome Tor Vergata Professor Giuseppe Novelli did the honours and hosted his colleagues in Villa Mondragone Congress Centre. He stressed the importance of both Conference and Symposium: ‘With this meeting we wish to reiterate the importance of training and education, as we are fully convinced that only a widespread dissemination of all forms of culture can be a bridge to overcome hostility and misunderstandings, hence reigniting a dialogue which has stalled for too long. Our meeting must send out a strong message to politics, whose distinguished and competent actors must treasure the recommendation we can provide and the path we want to track. It would be unfortunate if our call ended up in oblivion, since universities are the engine of economic recovery and a platform of extraordinary effectiveness to achieve world peace thanks to the one and only weapon they have got and we all need: culture.’
Furthermore, the Conference set out some shared guidelines which can have an impact especially on the most urgent and bitter challenges the whole international community must face today. Short-term initiatives feature the establishment of an International Academic Committee within the Symposium. It aims at passing University cooperation programmes mainly focusing on linchpin topics to be discussed during the event: University cooperation for peace in the Middle East, European Union and Russian Federation, European Union and immigration.