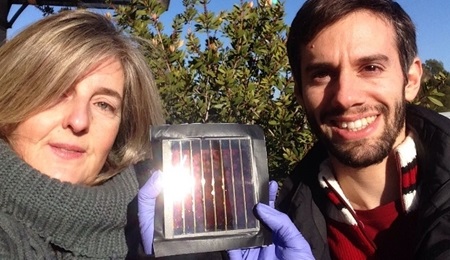 Graphene boost the efficiency of large area Perovskite solar module up to a world record high value of 12.6%

Bidimensional (2D) materials such as graphene and related materials (GRM) enable a new concept device for next-generation photovoltaics. Researchers of the Centre for Hybrid and Organic Solar Energy (CHOSE) of the University of Rome “Tor Vergata” together with their colleagues of the Istituto Italiano di Tecnologia (IIT) and University of Applied Sciences Crete (TEI of Crete), all members of the European FET Graphene Flagship, have demonstrated the unique benefit of GRM in large area, perovskite-based solar modules (PSMs). Usually, GRM are considered as a replacement for contacts in solar cells, however the international research teams considered a different strategy: Graphene Interface Engineering. Following this new concept, the researchers fully exploit the 2D material properties to tailor, by design, the interfaces between the perovskite absorbing layer and the charge transporting layers. They successfully used GRMs to realize large-area (active area 50.6 cm2) PSMs, achieving a power conversion efficiency (PCE) of 12.6%, setting the new world record for modules using perovskites.

The field of solar energy has been recently revolutionized by the use of a new hybrid material which mix the benefit of organic material tailoring the inorganic crystal structure, namely the Organo Metal Halide Perovskite. The recent development of perovskite solar cell (PSC) technology gave rise to an unprecedented efficiency for solution process fabrication making the PSC technology competitive with second generation thin-film photovoltaics such as copper indium gallium selenide or cadmium telluride. While this has been clearly proven at the Lab-scale, where solar cells typically have area below 1 cm2, a real benchmark for this technology is on the fabrication of module size (>> 1cm2) solar panels. This scaling up is however hindered by several intrinsic causes, such recombination and ion diffusion, mainly related to un-optimized interface between the perovskite and the other solar cell components. Thus, an ad-hoc control of the interface is mandatory especially for large area devices where the dimension of the interface increase proportionally with the cell area. Owing the 2D nature, the peculiar and tunable electrical and chemical properties, GRMs can indeed be the keystone for mastering the interface properties without modifying the solar cell composition. This was the concept exploited by the researchers: the interface between the Perovskite and Titania (a material collecting electrons) was improved by adding graphene and exploiting lithium-neutralized graphene oxide flakes to improve charge injection. This resulted in an increased efficiency from 11.6% to 12.6% of a perovskite photovoltaic module with and active area of 50.6 cm2. Beside the neat efficiency, the Graphene Interface Engineering also shows a strong impact on the stability of the modules, with prolonged shelf life stability for perovskite module retained more than 90% of the initial efficiency after 1630 h. The obtained results, coupled with both the availability of a wide library of 2D materials and the easy solution process makes interface engineering with graphene and other 2D materials a new design concept for PSCs and in general for the new generation of photovoltaic technologies.

Scaling the perovskite solar cells – says Prof. Aldo Di Carlo of CHOSE University of Rome Tor Vergata – is a critical issue. Beside the quality of the materials, it is mandatory to control the uniformity of the deposition and the quality of interfaces all over the size of the module. For this reason, the introduction of 2D materials that control the interface properties and improves, at the same time, the uniformity of the deposition is a winning strategy that can be easily scaled up at the industrial level.

“The possibility to produce graphene and other 2D materials in ink form is ideal for the realization of thin interface between different solar cell components said Dr. Francesco Bonaccorso (IIT). This approach significantly improves the performances of solar cells that coupled with the scaling up prospective of inks production and deposition can boost the commercialization of this technology.“

Prof. Emmanuel Kymakis, from TEI of Crete, who leads the PV task of the GF initiative, said: “In this work, the realization of high efficiency and stable perovskite solar modules explicitly enabled by GRM interface engineering, clearly demonstrates the potential of graphene in large scale technologies. GRM are a fascinating toolbox for mastering the interface properties not only in small area but also in large area devices. Our future work will focus on increasing the sizes and lifetime of the modules, and even constructing a GRM –perovskite solar farm.”